The first time I remember thinking about this: 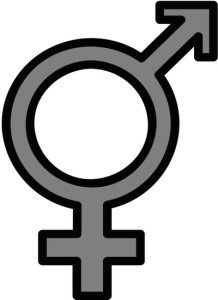 it was in a middle school science class. The teacher explained that it was a symbol for hermaphroditism – a condition in which people believed they were both male and female. I later learned that this wasn’t remotely accurate, but at the time, I didn’t know that, and anyway I was too busy processing my thrill of recognition to care. The (again, science) teacher went on to say that these people were sexually attracted to both men and women (cue more thrilling) – oh, and that people who used this symbol usually ended up dead of AIDS.

Did I mention that this was not a sex-ed class? That he just brought this up out of nowhere, with the symbol loaded up on the overhead projector?

I remember being angry at the teacher, and deciding that he was wrong, but it’s entirely possible that my brain is retroactively making me stronger than I was. I had always liked him; I was crushed by this weird mini-lecture; memory is tricksy. What I remember is being so exhilarated – feeling like someone else was showing me myself – only to punch the mirror next to my face as I started to smile.

When I saw Prince using his own version of the symbol as a name I remember feeling that same thrill. In my mind it’s woven together with how I felt reading David Bowie interviews, watching The Man Who Fell to Earth, realizing that I had more options than the binary that had always felt like a trap. They gave me that sense of exhilaration back. They demanded that I look in the mirror again. The told me to love what I saw, and fucking dance with my own reflection.

Hoo boy. It turns out I’m not so good at remembering to blog? I’ll try to get better.

As an excellent New Year’s gift, I learned that my post about cinematic writing mentors was one of Electric Literature’s top ten posts of the year! I wrote many words about Wonder Boys (one of my all-time favorite movies) and Finding Forrester (which I had somehow never seen before?) and the wonderful Kelly Luce edited it into publishability.

If you want to spend your first weekend of 2016 wallowing in literature, I recommend heading over to the list, which includes Lincoln Michel’s discussion of the ongoing battle between “genre” and “literary” writing, a round-up of literary podcasts, several looks at diversity in the literary world, and more!

Prepping the manuscript to give to my workshop group in a few weeks. Some moments I’m exhilarated – I see all these pieces of stories that I’ve managed to pull together into one (mostly, kinda, more-or-less) cohesive novel, and I’m incredibly happy that I’ve stuck with this project. But then…there’s still so much left to do.

So many holes, so many redundancies that need to be edited, so many characters that aren’t really real yet.

What does it mean when you have to repeat, “Don’t worry, even Tony Stark has panic attacks” to yourself over and over, until your heart rate falls?

Maybe I should start doing yoga.

Will this be it? The year I get serious? I hate being serious. I don’t believe it’s healthy to be serious for extended periods of time. And yet. If this book is ever going to be finished (and please believe me when I say that I want nothing more) I need to get serious.

Tony Kushner says that writing a play is like creating a lasagna – you have to layer in a strong foundation of pasta, keep a precise sauce-to-cheese ratio, and choose carefully as you add vegetables and/or meat, so you end up with something that people will actually want to eat.

I’m trying to think about this as I finish my first draft. What is the author’s responsibility to the reader? Have I as an author created a balance between my characters? Is my structure sound? Have I used too much cheese? Could there ever, possibly, be too much cheese?

This is Leah’s site. Yeah, not much here yet.

@cloudy_vision
A warrior of words taking a stand. Editor/writer with https://t.co/kRDPc4z3IC, fiction editor of @NoTokensJournal. Many opinions! All of them my own! They/she!