I don’t often do this, but a few days ago I finally got my thoughts on The Last Jedi coralled enough that I could write about them. The result was a long article on how the Star Wars series riffs on religion, and you can read it over at Tor.com.

Because it was lonnnnng, we cut a small section toward the end discussing the newer Star Wars’ films’ attempts to depict interior faith in addition to exterior works. I liked what I came up with, so I’ve decided to share it here. Enjoy!

One aspect that the new films have brought to the fore is the nature of faith in the Star Wars universe. Obviously you can’t really quantify faith, but throughout the earlier films we saw the Force through actions and results—like this snazzy number:

Obi-Wan sacrifices himself, but he’s back as a Force-ghost-voice before the end of the film. Luke rejects Vader’s offer of power, and throws away his lightsaber rather than fight—but were those moral choices or simply responses to his complicated feelings about his father? And what is Anakin’s own obsession with stopping death other than a massive failure of faith?

Which no, you don’t have to have faith to be religious any more than you have to have religion in order to be moral, you can practice most religions without believing in them, and some of the best people I know reject religious belief. But it did always seem interesting to me that we have a story about the collapse and resurgence of a religion in which none of the people discuss their beliefs. They just know. Luke never questions the Force ghosts. Never asks about afterlife, or the genesis of Tatooine, or any of the stuff that people entering into religious belief usually do, there is none of the fervency of the convert.

But here in the most recent three films we finally get that.

Finally, the Star Wars Universe has given us examples of faith—not just riffs on religious icons, or the results of using the Force, but belief in the Force. In the person of Chirrut Imwe, we have the most explicitly religious Star Wars character. Chirrut’s mantra of “I am one with the Force. The Force is with me” cuts through dogma and denominational differences to emphasize reliance on the Force. His robe and staff recall the aesthetic of a Buddhist monk, but we don’t learn the particular rules of the Guardians, and he never attempts to instruct anyone in his particular strain of Force-faith—he simply leads by example. Even though his Temple has been destroyed and ransacked by oppressive Imperial Stormtroopers, he trusts the Force, which seems to work through him despite his lack of Jedi training.

Rey’s belief is in the story itself. She believed in the story of the Force and the Jedi before she met Han and Luke. She meets Luke, and despite his grumpiness she earnestly sets off on an interior journey. She doesn’t quit when that journey doesn’t give her the answer she wants. She doesn’t give up when Kylo turns out to be untrustworthy. Her ally is the Force, more than any of the rest of them. Rey allows it to guide her during her initial fight with Kylo Ren, and again, when he offers her power. Despite Luke’s shabby treatment of her, despite learning of the problems with the Order, she puts her trust in the Force as it is within her, and follows it.

What of the other new Force user? 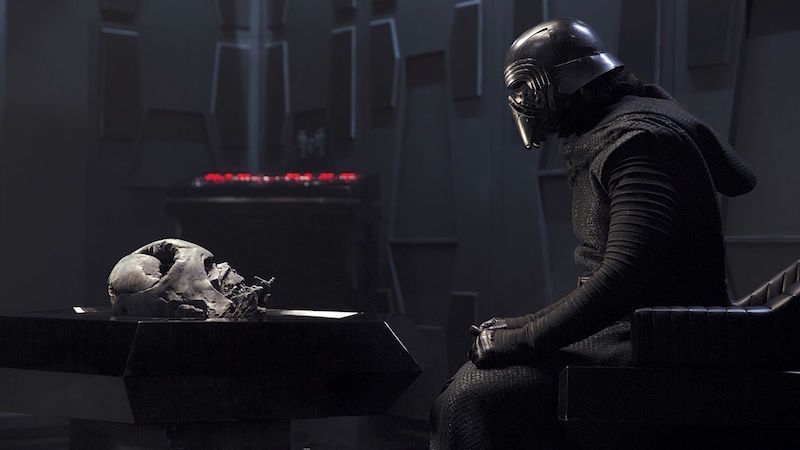 Kylo doesn’t even have to believe in the Force, it’s present within him, and if Luke is to be believed, manifests more strongly in him than in anyone else in the galaxy. But this raises questions: has Anakin ever visited Kylo? In The Force Awakens, Kylo essentially prays to his grandfather Anakin, promising that he will do his will. But how can he not know that Anakin turned away from the Dark Side? Has he simply rejected that part of the history he was (presumably) taught?

All of these questions are swept away in The Last Jedi. Kylo is so obsessed with outer trappings—demonstrations of power, hierarchy, his Gothy, nu-Vader lewk—that I think he’s lost access to any sense of working with the Force. He doesn’t want to tear the Jedi order down in order to build something better, or even to wreak vengeance on Uncle Luke—he just wants to destroy until he’s left alone and unchallenged. (We’ll see if I’m right in Part IX)

And finally Luke, the fallen monk, the failed Jedi, the bad teacher, who wanted to become a Jedi like his father?

We see him become greater than Anakin, than Obi-Wan, than Yoda. He reopens himself to the Force, knowing that it will kill him. He sacrifices himself not to Kylo, in order to teach Rey a lesson, or to death, because his body had naturally aged. He sacrifices himself to the Force Itself, privately, with no one to watch him, or learn from him, or understand just how extraordinary his act of Boddhisatvaism is. We’ve seen him spar, we’ve seen him battle, we’ve seen him manipulate, we’ve even seen him toss his lightsaber away, but this?

He is alone with the Force, and the Force is with him.